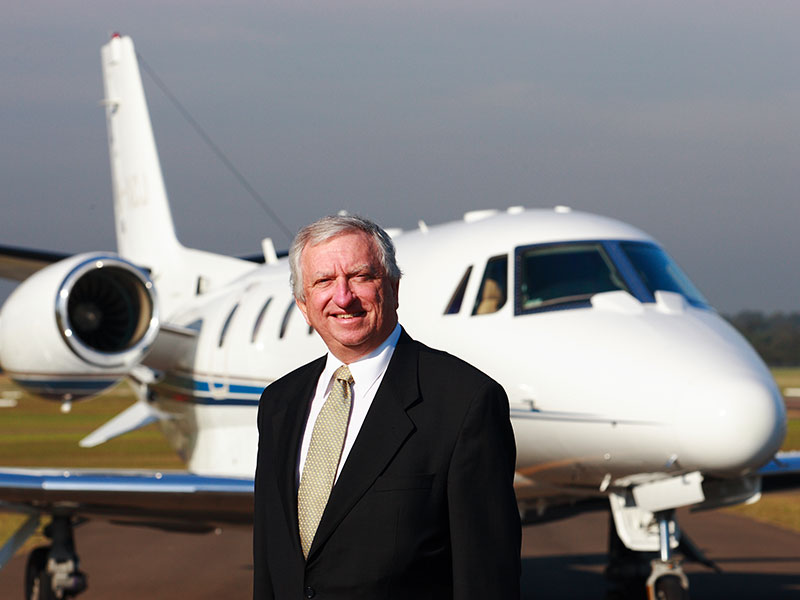 Whilst remaining in the RAAF Reserve Forces as an Instructor to the ATC, Steve started a career in aircraft sales and marketing with Hawker de Havilland and launched his own business in 1978, going on to form Aeromil Australia (later Aeromil Pacific) in 1980. Steve represented major aircraft manufacturers Beechcraft, Learjet, Embraer and Cessna and was successful in achieving a number of international sales awards. Steve has over 3,000 hours flying experience and has flown numerous types of aircraft from gyroplanes to business jets.

Steve has been instrumental in developing new aviation markets and business in the Asia Pacific region. He facilitated the start-up of several airlines in Australia, Papua New Guinea, New Zealand, Fiji, the South Pacific and Asia, including Sunshine Express Airlines and Alliance Airlines.

During the 1990s, Steve and partners acquired Austin Aero, Austin Texas, providing fuel and support services to major airlines and business and private aviation. As President of the company, the position afforded him considerable experience associated with corporate and commercial aviation in the USA.

In 1995, Steve moved his aviation interests in Australia from Bankstown Airport, Sydney to a greenfield site on Queensland’s Sunshine Coast Airport in order to develop Aeromil and other opportunities. Touted by the industry as a bold move, this initiative ultimately resulted in the purchase and construction of multiple hangars and facilities, the formation of regional airline, Sunshine Express Airlines in 1998, and in 2002, the establishment of the Singapore Flying College Advanced Jet Training facility for Singapore Airlines including two state of the art full motion flight simulators, four jet training aircraft and maintenance support services.

In 2002, another significant career milestone was achieved, Steve Padgett co-founded Alliance Airlines, acquiring the assets of Flight West Airlines which was in administration at the time. From two Fokker airline jets and 75 employees at inception, Alliance has grown into the pre- emanate Fly In Fly Out (FIFO) operator in Australia and, supplier of charter services to all major Australian airlines. With over 40 Fokker aircraft in service, the largest single fleet in the world, the airline is now a public company with over 600 employees and bases all over the country. Steve was founding Chairman of Alliance Airlines and retains that position today.

In 2005, Steve Padgett’s company Aeromil Pacific secured the representation rights for Cessna, (internationally, the largest manufacturer of general aviation aircraft) and expanded business and infrastructure on Sunshine Coast and Bankstown Airports. A unique aspect of the expansion was the launch of the Cessna Store, the world’s first aviation store in the heart of the central business district of Sydney, in 2008.

Under the guidance of Steve, Aeromil Pacific became one of Australia’s largest and most successful privately owned and operated aviation companies, acquired by Hawker Pacific in 2015, with Steve appointed Deputy Chairman of Hawker Pacific (Australia).

Currently, Steve’s personal business interests in Sydney and the Sunshine Coast are:

As Chairman of the Australian Aviation Hall of Fame, a member of the Australian Air Force Cadets Foundation and life member of the Regional Aviation Association of Australia, Steve contributes to the industry which provided him with his start and his career long passion for all things aviation and the people who work with him in it. Steve Padgett is recognised as a leader in aviation and has been acknowledged by his peers as one the region’s top 10 people of influence.

In June 2019, Steve Padgett was awarded the Medal of the Order of Australia (OAM) for outstanding achievement and service.

Steve Padgett is married to Lorraine and has two children and five grandchildren. Darren, his son, is a Qantas Captain with more than 30 years flying experience and Leanne, his daughter, built a successful career as an event manager. Following in the family tradition, and aged 15, two of Steve’s grandchildren have started learning to fly!

We are still operating for Domestic Charter Flights within Australia and International Charter Flights to New Zealand. If you need to move yourself, your family or your staff, please contact us

Aircraft
Get a Quote